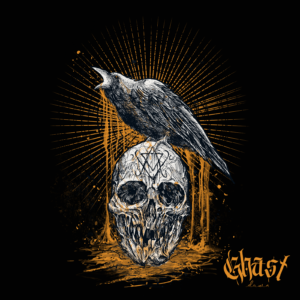 Ladies and gentleman prepare to be pummeled into submission for Port Elizabeth based purveyors of punishing Deathcore infused Metalcore Ghast have just released their debut album entitled ‘Dawn’ and it is explosive! This blistering foray into sonic carnage is ferocious and fraught with voracity.

Beginning with the eerie tones and ominous atmospherics of “Abaddon Birth” (Intro) which swings headfirst into a rhythm that is akin to a chorus of bouncing sledgehammers, the tone of the album is set triumphantly. Track one “Swarms” is a dynamic and devastating knuckle sandwich that runs the gamut from Thrash infused Metalcore to Downtempo Deathcore with its jagged rhythms and propulsive momentum. “Beggars” is a searing surprise packaged slice of smolder. Beginning with a angular rhythm that recalls Dillinger Escape Plan and Every Time I Die said track continues on a corrosive path that proves that this quartet are not content to follow the herd and rather the beat of their own proverbial or in this case literal drum.

The polish that sheathes this album glistens and allows the musicianship within to swagger with mammoth presence. “Nihilus” is equal parts Hatebreed, The Acacia Strain and Madball, a thunderbolt of voracious auricular violence that is forged in Hardcore hellfire! “Newton Park Bible Burning” ramps up the volume and virulence with a barbed Black Metal riff that rears its head about a minute in and then reverts back to its initial bludgeoning core informed crush.

Beginning with a gritty riff “Blood Court” continues this bands patented scorching Deathcore infused Metalcore with aplomb. I adore the manner histrionic and dynamic vocals accompany each corrosive track, fluctuating between gruff Deathcore growls, Metalcore shrieks and Hardcore howls. The low slung riffs, battering rhythms and bruising heft that construct this album are a pleasure to witness. “Silent Hell” is a serpentine scorcher with a sparkling guitar solo which leads into the throat ripping theatrics of “Cathedral Ward”, a track that is a tumultuous hybrid of jagged Mathcore riffs and Downtempo bounce.

“Dawn (Interlude)” begins with a lilting piano and progresses into an emotive confluence of melody and rhythm before ending in an ominous fashion. Ending off “Dawn” is the incineration chamber that is “Penance”. This track is far more Post-Hardcore orientated bringing to mind Eighteen Visions and From Autumn To Ashes as much as Oceano and Suicide Silence, keep your ears poised for the jangling melody that announces itself at three minutes and fifty minutes in. “Dawn” is a devastating debut album by fledgling quartet that have the potential to pummel their way to the top!