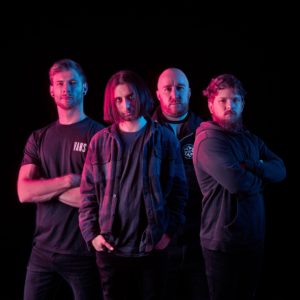 Hailing from the concrete sprawl of Johannesburg, South Africa, Sunken State ply a scorching confluence of Thrash, Groove and Melodic Death Metal that swaggers with vitriolic vibrancy and violent vigor. Having come into being in 2018 and consisting of Guitarist Mathew Swanepoel, Bassist Dwayne Klingbiel, Drummer Pete Pistorious and Vocalist Dwayne Hees, this quartet released their initial EP “Enter The Grey” in 2019 followed by the single “This Is The End” in 2020.

Their latest album “Solace In Solitude”, to be released on the 11th of June, is a statement of smoldering intent, one in which all members involved are operating at the height of their powers, a sonic wildfire that is dynamic, nuanced, fraught with stellar musicianship and poised to attain dominion over the earthly malaise with it’s patented blend of punishing rhythms, heinous vocals, glorious guitar playing and infectious anthems. Housed in a robust, well rounded production that glistens like a steel plated axe, this ten track foray into ferocity is a blissful listening experience that melds varying Metal sub genres into a melting pot that never sounds labored or beset by pretense.

Beginning with the frenetic froth of the NWOAHM inspired “Beg For Mercy” which leads into the smoldering “Swindler” which is due to be premiered on May the 28th, one is instantly exposed to a blend of bludgeoning rhythmic dexterity and tightly wound, propulsive, rapidfire Thrash riffing reminiscent of Mark Morton and Willie Adler from Lamb Of God. Track three “Burn Society” is driven by a muscular groove that brings to mind the playing of Dimebag Darrel on the legendary “Vulgar Display Of Power” by Pantera. I am smitten by the vocal savagery of Vocalist Dwayne Hees, who only three tracks in proves that his vocal artillery is vast as he fluctuates between high pitched screaming, midrange growls, spoken word and deep gutturals not unlike the type one will hear on a Slam track. “Separation Has Begun” due to be premiered on April 30th, boasts an anthemic chorus and tinkling keys before in its latter half Black Metal sounding progressions bring the track to a triumphant close.

Fiery riffs, blistering drumming, visceral vocals and exquisite bass playing pepper this album like shotgun shells on an auricular battlefield. Track number five “Egyptian Pariah” begins in a frantic fashion and at about two minutes and forty seconds in engages in proggy plod after which neck snapping rhythms take precedence once again, this track further cements the fact that Bassist Dwayne Klingbiel is a force to be reckoned with. “Enter The Grey” is a galloping slab of infectious and epic musical hysteria that brings to mind Unearth and Shadows Fall with its spectacular fret bending gymnastics, flirtations with middle eastern melodies and roaring vocals that are as catchy as an airborne contagion. Glorious. The dual guitar interplay and solo in the latter half of this track are amazing as are the stunning layered, almost Geddy Lee like vocals that bring it to a close.

“This Is The End” stampedes out of the proverbial gates with a riff that would make Rob Flynn from Machine Head proud and proceeds to cave in skulls throughout its runtime with grooves that leave scorched earth in their wake. The tasty breakdown that rears its deliriously devastating presence at two minutes and thirty four seconds throughout the tracks runtime is malevolent. “Interlude” is a spine tingling exercise in Middle Eastern melodies, instrumental prowess and jackhammer riffing that is utterly celestial. Track nine “Chaos & Turmoil” boasts a jagged bedrock of rhythm that alternates between Thrash infused cacophony and off kilter drum battery on top of which Dwayne Hees unleashes his trademark hybrid of manic verbiage.

Ending the staggering sonic journey that is “Solace In Solitude”, a title I relate to on a cellular level, is the stuttering and staccato slab of smolder that is “Recover Yourself”. Folks prepare for a foray into musicianship of the most amazing kind where the riffs, rhythms and roaring vocals are volcanic. You are in for a treat of the most turbulent and triumphant proportions. “Solace In Solitude” drops on June the 11th.