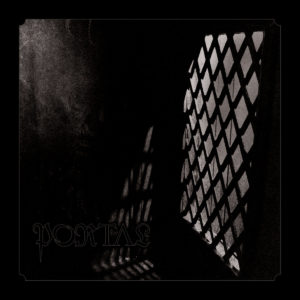 Witnessing PORTAL’S progression over the arc of their career has been akin to baring witness to an amorphous mass slithering forward through the eldtrich depths of RL’YEH, its every undulation and manoevre glistening with unholy intent and loathing.

From their earliest releases onward PORTAL have perfected their patented brand of punishing and otherworldly Death Metal; a permutation of the form that hinges upon texture and atmosphere to achieve maximum impact through ominous resonance. Theirs is a murky cesspool of thick riffs that are more like quicksand then the barbed, chugging and staccato displays of riff mastery one is prone to hearing in Technical or Brutal Death Metal. This Australian coven have carved a niche for themselves in the extreme music stratosphere that has filtered through to many practitioners of the form.

Enter their latest album, the suffocating and deliciously devastating slab of abysmal smolder entitled ‘Avow’. Opening with the suffocating and claustrophobic, cascading waves of sound that is “Catafalque”, one is thrown into a blissfully nauseating sinkhole of dense ambient textures and turbulent rhythms over which The Curator holds court in his trademark crypt scraping howl. This ferocious display of ghoulish grandeur lays the fecund foundation upon which their latest album is built. Track number two, the jarring, “Eye” is an equally bludgeoning exercise in grisly and abysmal auricular damage. The blasting drums and infernal crush of “Offune” is layered in eerie and vile effects that unhinge as much as they cause one to bristle with mirth.

There are certain textures and sounds that I have not heard on previous PORTAL albums and the gritty, fuzz choked intro riff of “Manor Of Speaking” is emblematic of this. Said track is a malevolent assault of the most murderous and epic proportions.

Track five “Bode” is a baleful dirge of note, one that heaves its weight around like a sea-beast whilst closing track “Drain” is a deliciously corrosive conclusion to an album mired in the dark places which exist between the stars. Said track incorporates lovely layers of harsh electronic noise and dark ambient into Portal’s trademark sonic froth in a far more predominant fashion then witnessed previously throughout the album’s runtime.

Although each of the six compositions that construct ‘Avow’ possess their own specific identity they merge together to create a piece of art that demands to be listened to in its entirety.

A PORTAL album is a holistic experience in which one can languish, bathing in its dissonant, devastating and dirty textures with relish. One inevitably submits to the terrifying and turbulent maelstrom at hand and is rewarded in the most magnificent fashion.