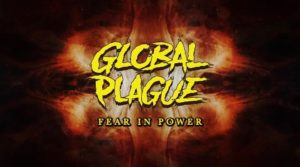 The latest track courtesy of Global Plague entitled “Fear In Power” is both bludgeoning and beautiful in equal measure! Following in the footsteps of “Parasitic”, this slab of sonic heft expands upon the template and scope of their first single with unabashed immensity and prowess.

Sonically “Fear In Power” is far more nuanced, dynamic and overtly melodious then the unbridled ferocity of “Parasitic”. Lyrically “Fear In Power” comes across as a savage indictment on the military industrial complex, the dismal machinations of those in power and the dire consequences thereof.

With seething lines such as “Cowards in their caves, cities turn to waste, followers in body bags, nihilistic holy land” one knows that Global Plague are not messing about as they paint a portrait of a world going up in flames. In that sense their name is apt indeed.

With the mighty Bram Epstein at the helm, handling Bass, Guitar and harsh vocals alongside Jackson Wardon on Drums, John Souki on Lead Guitar, this latest incarnation of Global Plague which features the talented Luke Mellinger on clean vocals will pummel you into blissful submission.

This tumultuous track proceeds at a propulsive pace in which interesting staccato rhythms, crooning vocals and roaring bellows collide in a confluence of crushing fury. The clean singing is at times reminiscent of Maynard James Keenan which adds an air of gravitas to the otherwise savage proceedings. The sparkling lead guitar that asserts itself in the last quarter of the track is a pleasure to behold as well.

This finely constructed work of fevered wizardry could be loosely deemed Deathcore yet it is so much more! Drawing upon an almost Melodic Gothenburg Death Metal framework aka At The Gates and Dark Tranquility whilst serving forth a nerve battering rhythmic assault that causes fault lines to form in the earths crust, listening to this track is a must! Global Plague will own you!