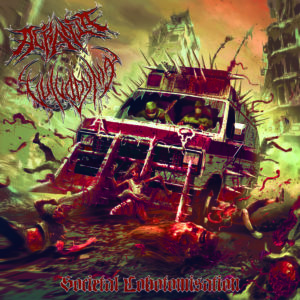 If you’re a Slamming Deathcore fiend such as myself then the prospect of a split EP between South African heavyweights Vulvodynia and UK wrecking crew Acrania is one to celebrate. I have been waiting with bated breath to wrap my fevered eardrums around this release since I had been made aware of its impending arrival and finally it is here!

Consisting of four ferocious tracks, two by each respective sonic coven, the aptly titled “Societal Lobotomisation” EP is a searing indictment on societal ills and the herd like mentality that governs the majority with such stifling savagery, one given to inevitable violent consequences.

Beginning with the kinetic and crushing “Guillotine Necktie” by Acrania the Vulvocrania split starts in a most explosive fashion where blistering flurries of double kick fury collide with vitriolic vocals and rapid fire guitar riffing in a corrosive confluence of Deathcore fury. Vulvodynia then provide us with the punishing track “The Disconnect” which staggers forward at a far more sluggish yet no less savage pace. This track is fraught with hefty slabs of riffage that collapse like boulders off a mountaintop. Acrania then follow with the bone shattering and somewhat more blackened take on Slamming Deathcore in the form of the vehement “Legions Of The Unenlightened” which further casts a disparraging gaze upon the flawed state of humanity. Vulvodynia bring the EP to a close with the superbly titled “Aborning Pestillence” which is a jarring slab of Slamming Deathcore replete with jagged riffing, superb staccato rhythms, scouring vocals and a smoldering solo, a plague riddled expulsion of hateful proportions.

All in all, the joyfully titled VULVOCRANIA ep “Societal Lobotomisation” is as to be expected; a bludgeoning foray into the barbaric sounds plied by each respective collective. So if you yearn to burn in a bestial inferno of well executed sonic fare where Deathcore and Slam comingle methinks this EP is the answer to your putrid prayers.