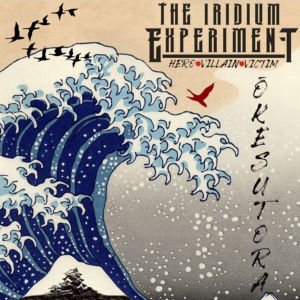 Folks, prepare to be floored and awed in equal measure for the Instrumental version of the EP ‘Hero.Victim.Villian’
by The Iridium Experiment is a scintillating exercise in musicianship and instrumentation that will leave you reeling in a state of blissful reverie.

With a revamped production that is robust and sparkles with sumptuous clarity, the anthemic melodies and infectious rhythms on display throughout the five tracks that construct this EP can be experienced in all their sonic glory. All elements herein converge in a manner that is fraught with cohesion, offering a auricular narrative that is all immersive.

Having listened to the chest beating confluence of catchy Rock and Arena Metal that is ‘Hero.Victim.Villian’ with vocals I state,without a shadow of a doubt, that this its instrumental counterpart speaks for itself with splendor and effectiveness. Herein the bedrock of bludgeon and beauty that The Iridium Experiment specialize in exists as an entity in its own right and offers much to revel in. The overhauled production and added instrumental layering sheathes everything in an incandescent glow which harnesses and amplifies the acumen and prowess of all involved.

The brightness of this version cannot be overstated for each instrument, melody and rhythm carries its own distinct identity and presence which perhaps was not as prevalent on the initial EP. From the opening heft and swagger of title track ‘Hero.Victim.Villian’ the scorch of all involved is presented in high definition. From its lilting intro to the barreling, Thrash infused meat of the track one is carried away on a rollercoaster ride of ravishing proportions. Expect fantastic overlays that further add vigor to the proceedings.

All musicians involved get to shine in the most luminesent fashion. With Kenneth Hugh and Ewan Botha at its core and including in their ranks Merrick “The Bear” Kyle on Bass, Damian “D.C” Coldfield on Guitar, Caleb Smith on Drums and Ruan Rabie on Guitar, this sextet and their creative expulsions shine like a chrome plated tank.

Track number two “Route.Cause.Analysis” with its central chugging riff and reverb drenched chorus is an exercise in NWOBHM pummel that is punchy and tightly wound, perhaps explosive in a manner that the, none the less, commendable initial version was not. I challenge anyone who hears this track not to pump their fists in the air!

“We, the forgotten” is an exercise in melodic interplay and a neck snapping riff that is tailor made to set stadiums ablaze with its catchy corrosion. On this, the Instrumental version, it is a pleasure to witness the subtle inflections and rhythmic dexterity play out like never before.

“Losing My Mind” will hold you captive in a labyrinth of orchestration and guitar riffs that cut like barbed wire, beautiful to say the least and all the more so for being housed in such a stunning production, one fraught with tinkling keys. This is a track that ebbs and flows like the proverbial tide between uptempo propulsion and introspective plod.

Closing track “Bathos”, still my favorite, opens with an ominous piano intro which spirals into a smoldering collision of riffs and rhythms that take no prisoners and then proceeds to fluctuate between what is certainly the patented formula that The Iridium Experiment specialize in, one which deftly alternates between melacholic passages of emotive melodrama and whiplash ferocity.

I applaud The Iridium Experiment on what amounts to a stellar display of deft musicianship and sonic artistry. This EP is further proof that these fine feathered fellows are in flight and if their soaring melodies and savage rhythms are anything to go by they are poised to dominate.