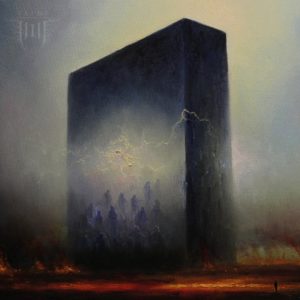 The latest album by Humanity’s Last Breath, “Valde”, is a sonic behemoth of note that further cements the fact that this Swedish collective create some of the most mercilessly mammoth and malevolent music currently out there. “Valde” is a vitriolic exercise in devastating, Industrial infused, Downtempo Deathcore that is destructive of light, akin to a black hole that swallows everything in its orbit.

I can confidently state that this quartet create some of the most crushing stuff I have been fortunate to come across in any metal sub genre. Throughout the fifty two minute runtime of this fearsome album dense guitar riffs and debillitating rhythms fall like cinder blocks from a collapsing skyscraper courtesy of Guitarists Buster Odeholm, Calle Thomer and Drummer Marcus Rosell whilst the vehement, roaring vocals of Filip Danielsson govern the proceedings with ferocity.

Gargantuan in every sense of the word, both the production and instrumentation that construct this album are oppressive and all enveloping. From the intro “Dodsans” and opening track “Glutton”, a track fraught with angular slabs of Meshuggah like riffs, to the epic orchestration infused fire of “Dehumanize” and the brutish onslaught that is “Haedean”, to name but a fistful of the utterly bone shattering and bleak works of vein bursting scorch that construct this absolutely awe inspiring piece of auricular damage, “Valde” is an exercise in music as artillery used to inflict maximum damage.

The stuttering, savage and smoldering riffs that pepper this album like napalm leave me reeling in a state of euphoria. Everything just works in jarring unison to maximum effect. Witness the jagged assault that is “Tide” and kneel in awe as it segues into grandiose symphonic pummel in its latter half.

What a work of apocalyptic and staggering sonic wizardry this album is. I applaud Humanity’s Last Breath for bringing forth the hellfire in the most harrowing way. “Valde” is a cohesive artistic statement that goes for the jugular with style and dangerous swagger. Submit to the carnage and allow Humanity’s Last Breath to lay siege to your synaptic chasms! Resistance is futile!