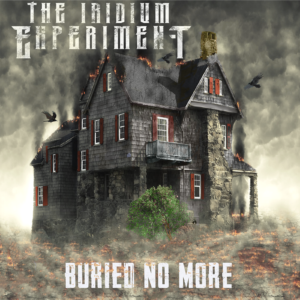 Ladies and gentleman, boys and ghouls, The Iridium Experiment are back with five festively ferocious tracks of blissfully blistering rocking bluster in the form of their brand spanking new EP, the scorching ‘Buried No More’.

Surmounting perhaps everything that preceded it both in terms of evocative song-craft and in terms of production, one that crackles with voltage and crystalline clarity, ‘Buried No More’ is a fist pumping collection of crowd pleasing anthems that leave themselves seared onto ones frontal lobe with immediacy.

Featuring in their ranks the powerhouse that is Kenneth Hugh on Guitar, low end master Merrick Kyle on Bass, rhythmic magus Caleb Smith on Drums and of course he of the melodious splendor, Nick Rhynas on vocals, this quartet unleash a sonic platter of cohesive musicianship that bristles with savagery and swagger in equal measure.

Beginning with the rollicking romp that is “No Enemy”, seemingly an indictment on societal constraints and the delusion perpetuated by the military-Industrial-Complex, one is treated to a uptempo rocker that reminds me of a piece of auricular pummel that straddles the divide between Metallica’s self titled album and Avenged Sevenfold’s “City Of Evil”. In other words it is an immaculately constructed piece of song-craft that is built upon a bedrock of tautly wound thrash meets 80’s Rock riffing, pounding drums and vitriolic vocals.

“F(L)ake” wonders through a somewhat more melancholic sonic avenue, a plodding assault that pulls at one’s heartstrings replete with the alternately crooning and corrosive vocals of Nick Rhynas which ride atop a flood of guitar driven grandiosity. “Family Tree”, definitely a favorite of mine from this fabulous EP, is a majestic study in rhythms that ebb and flow like a tide of fire alongside impassioned vocals that are fraught with vehemence. When Rhynas roars “Ashes to ashes, dust to dust” one can feel his emotion. This is yet another track,that to me, is an indictment on humanity and its damned plight.

Track four “Buried Before” begins with a squealing onslaught of rhythms that slither atop a mighty drum performance and proceed to expand into a truly exhilarating exercise in melodic metallic Rock replete with a chorus that will be looping through your cranium ceaselessly. To me this track has a somewhat more positive bent lyrically which in tandem with the uplifting sonic pummel amounts to a piece that is truly volcanic.

In conclusion, The Iridium Experiment continue to forge ahead with their patented brand of pummel with aptitude and aplomb. ‘Buried No More’ is an example of progression for a band that are continuously honing their sonic arsenal with passion, dedication and a deft understanding of dynamics and structure. If you’re in the mood for an exquisite example of explosive music that draws upon and synthesizes Rock and Metal into a powder keg of the most propulsive proportions then The Iridium Experiment have you covered with their latest EP, the powerful ‘Buried No More’