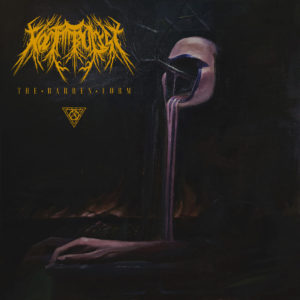 In an existence that sways to the rhythms of omnipotent entropy, desolation and decay only music of the most merciless and malevolent kind will suffice. Enter the mighty Noctambulist whom embody the nullifying undertow that underlies all things through their maelstrom of devastating and bleak Blackened Death Metal.

On their latest album ‘The Barren Form’ these murderous miscreants unleash a whirlwind of frenetic and frenzied pummel wherein jagged guitar riffs, blistering drum battery and vein bursting rhythms collide in a fashion that is destructive of light.

Bringing to mind sonic covens such as Ulcerate, Portal, Convulsing, Nightmarer, Haunter, Deathspell Omega and Dodecahedron in equal measure, the brackish bluster that these lads specialize in smolders like an unholy supernova.

Beginning with the dread infused intro “Exordium”, ‘The Barren Form’ swerves into the unrepentent savagery of opening track “Depletion” which then leads into the neck snapping scorch of “Infinitesimal” which traverses a labyrinthine sonic sprawl for its eleven minute runtime.

The eight minute turbulence of “Engulfed” cuts a relentless swathe of dissonance, drum battery and barbed riffs through the ether with a thirst for annihilation whilst the seven minute smolder of “Contrivance” is a hair raising exercise in discordance and hysteria.

“Dissolution” brings this deliriously bleak release to a close with corrosive heft. Herein one is treated to a chaotic swirl of vitriol which has teeth and I for one welcome its bite with open arms.