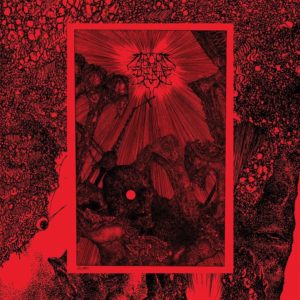 Released courtesy of the magnificent Sentient Ruin Laboratories, ‘Dyspnea’ by Labored Breath is a chaotic maelstrom of raw frenzied Black Metal that convulses like a contortionist on ketamine.This thirty six minute descent into aural devastation is akin to being enveloped in a cesspool of barbed wire and blood spattered limbs.

Beginning with the mangled auricular savagery of “Hypoesthesia” one can only sit back and admire the tapestry of turbulent and tumultuous sonic warfare on display. This is very much Black Metal of the most angular and jagged variety, perhaps inspired by Katharsis, Funeral Mist and Antaeus yet far more unhinged and off kilter. Track number two “Agnosia” continues the corrosion with unrestraint wherein vocal overlays attain dominion over a thorny labyrinth of riffs and rhythms that bleed into one another with anguish and abandon. Track three, the fractitious soundscape of piledriver like rhythms and eerie ambience entitled “Serpent Womb” supplies one with some respite from the Black Metal barrage of the two previous tracks.

“Belie” is the musical equivalent to a firing squad that further entrenches one into the mire of blast beat fueled, razor wire guitar infused, screeching Black Metal that Labored Breath specializes in. Without any noticable patterns or structure governing the songs on display the sonic art herein is almost avante garde in terms of texture and form. Like the shotgun art of William Burroughs yet in the form of sound, the riffs, rhythms and textures are seemingly thrown together in a haphazard fashion yet one that has vicious intent at its core. With the aforementioned in tow I am in no fashion discounting the musicianship rather I am describing the manner in which this man uses his arsenal of knowledge to express himself in the most hellish and hurtful fashion.

Ending our jarring and jagged journey is the pummeling “Pathogenesis” which begins in a punishing fashion and segues into a lilting dark ambient passage come songs end.

This is definitely the type of album that requires time to climbatize to for its frenetic sonic permafrost can prove to be challenging terrain to traverse. I am certainly one for such turbulent climates and will continue to frequent the harsh conditions Labored Breath conjures forth with such malevolent magnitude