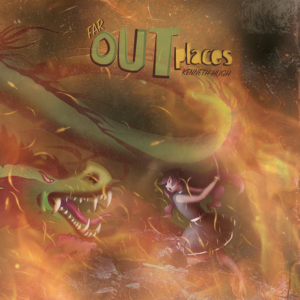 Prepare to embark on a journey of epic proportions. Your conductor for this ride into the fantastical is multi-instrumentalist and creative fountainhead, the inimitable, Kenneth Hugh. Ladies and gentleman, this maven of magnificent musicianship will transport you to ravishing realms that exist beyond the mundane reality you call home. Strap in and enjoy the ride for it is time to be spirited away to some seriously ‘Far Out Places’.

This work of whimsical and wondrous Instrumental Rock is Kenneth Hugh’s third solo album, an album preceded by ‘7 Kinds Of Strange’ and ‘War Of Attrition’. As far as being listened to ‘Far Out Places’ demands that one allow oneself to be completely enveloped by the alternately luscious, funky, ethereal and uplifting music on display.

Beginning with the sumptuous and serene “Quiet Spaces”, a track that has a glorious riff at the center of its framework which entangles itself into the sinews of one’s cranium, one is then calmly led into the next track “Far Out Places” which is a uptempo rocker that throws down the boogey with conviction. Two tracks in,the sonic landscape, is lush and pleasant, a veritable scenic meadow of lovely guitar and bass interplay, reverb drenched leads and stellar layering that leaves one in a state of blissful calm.

It is then, a minute or so into the serpentine heft of track three “Almost Home” that one is gloriously thrown off kilter by a rhythmic shift in riff and rhythm that recalls King Crimson at their most barbed and angular. Like a rapid-fire meteorite shower raining down from skies sheathed in the glistening light of the moon this foray into chugging ferocity is short-lived, settling back into a melodious plod which then progresses into some tasty strumming. A great change of pace, one that complements the flow of this sonic journey with aplomb.

Track number four, the aptly titled “Space & Time” offers up a constellation of anthemic riffs, understated melodies and luminescent layering to feast upon. Then its time to adorn yourself with your dancing shoes for “Highway 130” brings on the fat riffs, pounding drums and rip-roaring leads with abandon! Whilst witnessing this robust rocker play out I imagined it to be something that would be playing on the jukebox in the infamous Mos Eiseley Cantina Bar in Star Wars due to its funky, piccolo like keyboard tinkling. Infectious and catchy in equal measure.

Next up is the somewhat more melancholic stomp of “Dragons We Feed”, a song that begins with a ominous tapestry of melodious interplay before expanding its palette into a emotive embattlement of riff and rhythm and then settling back into the menacing gait witnessed at the beginning of said track. From there “Dragons We Feed” alternates between the former and latter with nimble acumen, fraught with fabulous lead guitar noodling and Prog Rock mastery.

Track seven, “Ethereal” is explosive and transcendental like a supernova; a celestial expulsion of instrumentation as healing, a balm to the beleaguered, that hinges upon a uplifting and catchy collision of magical riffs, Kenneth Hugh’s patented sparkling leads and a bedrock of solid skinsmanship. The iredescent glow of this fine track bristles with wonder as it slithers onward like a chrome plated serpent.

Ending off this galactic journey into ‘Far Out Places’ is the aptly titled “I’m done Here” a fitting conclusion to an album that runs the gamut from gargantuan riff inspired pomp, interstellar atmospherics to reflective passages that undulate with throbbing motion. This fine track is a great example of everything preceding it, a pummeling foray into a milky way of otherworldly rhythmic interplay and melodies that move with propulsive momentum.

In conclusion, the ebb and flow of the immaculately constructed and musically mellifluous ‘Far Out Places’ is a cohesive work of sonic art that deserves to be experienced in its entirety for with all its peaks and valleys it must be traversed with open armed resolve. Housed in a crystalline production, this hearty hybrid of AOR and Progressive Rock is a rewarding and fun listening experience. Check it out posthaste! Strap in and enjoy the ride!