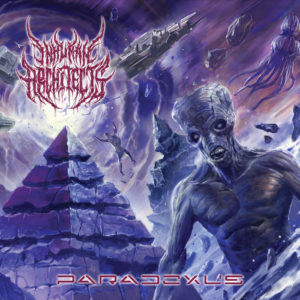 In the form of their debut album ‘Paradoxus’ Portuguese Deathcore denizens Inhuman Architects have unleashed a monstrous and menacing slab of smolder that portrays a band at the height of their powers.

In fact the streamlined ferocity that this fledgling quartet unleash is that which certainly exceeds what one would expect from a sonic coven that has only existed for a year, both in terms of execution and cohesion.

Herein you will be treated to a forty minute exercise in the type of punishing Deathcore that bands such as Job For A Cowboy, A Night In Texas, Angelmaker and Aversions Crown deal in, i.e Deathcore of the most technical and turbulent kind. The fact that Inhuman Architects are able to hold their own alongside the aforementioned heavy hitters is in and of itself impressive and praiseworthy.

‘Paradoxus’ is a thrillride of note where neck snapping rhythms, tautly wound guitar riffs and the trademark high pitched screams and deep throated roars that are a such a crucial part of any Deathcore band’s arsenal collide in a maelstrom of merciless savagery and violent swagger. The guitar playing of Fabio Azevedo is particularly awe inspiring as this axe master governs the proceedings with a weaponry of palm muted pummel, chugging mastery, tremolo borne tumult and some seriously searing solo’s such as the the one that adorns the latter half of closing track “Vortex”.

I can only imagine that if ancient astronaut theorist Zecharia Sitchin was still alive he would certainly applaud Inhuman Architects on the manner in which they expound upon extraterrestrials with such fevered passion.

Whether it’s the bludgeoning “Behold The Creator”, the rousing rumpus of “Nibiru’s Wrath” or the galloping glisten of “Night Intruders”, there is a consistency on display throughout the runtime of ‘Paradoxus’ both in terms of crushing heft and quality.

If you’re fiending for a fix of ferocious Deathcore that is as punishing as it is professionally executed then Inhuman Architects have you covered.