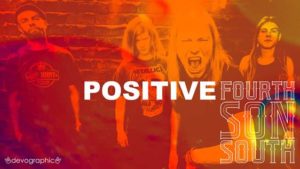 Bring on the uplifting, Bluesy rock baby! Yessiree! Cast your cares to the metaphorical breeze and boogey down right now. Fourth Son South have you covered with their patented barroom skronk! If you fiend for music that is unpretentious and wears its funky, blues infused influences on its veritable sleeve with confidence and pride then look no further.

From the lilting intro to the funk infused, boogey rock of the meat of the song, “Positive” is just that, a uplifting slab of good times that will have all dancing on bar counters over the globe till its three and a half minute runtime draws to a close.

Herein the boisterous, bouncy bass and vocal harmonies of Franco Jamneck, the ravishing rhythm guitar of Dale Mchardy,
The lead guitars and lead vocals of Peter Toussaint and the vocal harmonies and solid back-beat supplied by drummer Carel Viljoen collide in a conflagration of catchy rock that will undoubtedly appeal to all and sundry whom posses a penchant for such fare.

I may not be the type of frizzy lizard that frequents this type of stuff often, yet cannot discount the fact that the intent behind this track has been achieved with flying colors.

A fantastic single from an album that is gonna knock off your socks!
Let the good times roll.