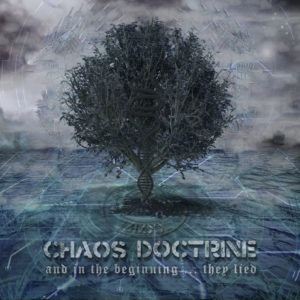 The latest album by Johannesburg based wrecking crew Chaos Doctrine entitled ‘And In The Beginning… They Lied’ is a devastating piece of aural damage that deserves your attention. I have been salivating like a lovelorn ape at the prospect of wrapping my ears around this slab of scorch and finally have been given the opportunity to do so, emerging from its sulphur drenched depths awed and floored in equal measure.

Executed with finesse and housed in a robust production that gleams like an unsheathed blade the latest album by Chaos Doctrine ignites the proceedings with the intro “And In The Beginning” which acts as a eerie precursor and mission statement of sorts to an album that runs the gamut from ravenous Industrial infused Thrash to scintillating Symphonic, Scandinavian inspired pomp. This ominous intro, one built upon a bedrock of delicious clanging Industrial percussion, is a searing indictment on societal conditioning and forcefed values as espoused by the samples that ride atop the aforementioned cantakery.

Opening track “Blood Serpent God”, featuring Anna Hel is a propulsive slab of pummel that boils over with blistering riffs and Scandinavian oriented smolder. At two minutes in layers of vitriolic vocals and a tumultuous tempo change take place leading to said tracks savage conclusion. Corrosive like battery acid and as catchy as an airborne contagion.

Next up is the sonic battering ram that is “Black Friday Bedlam”. Premiered earlier this year and featuring Jorgen Sandstrom from Grave and Entombed fame, this exercise in malevolent forward moving momentum is a fist pumping foray into ferocity that will leave you gobsmacked.

“Harlot” begins in a manner that is mired in an almost Dimmu Borgir meets Cradle Of Filth aesthetic and proceeds to become an exercise in stunning symphonic layering, tightly wound Speed Metal riffing and deliciously vile vocals.

At the halfway mark we are treated to the instrumental “Nocturna Mors”, a slithering piece of seemingly giallo cinema inspired sound design which masterfully leads into the ominous and gargantuan “Father Grigori”. Another track premiered earlier this year “Father Grigori” is a immaculate blend of unsettling atmospherics, lumbering rhythms and razor sharp riffing.

“The Rite” staggers forth with a southern fried riff and electro sheathed layering before convulsing like a crazed contortionist into a crushing froth of feral Industrial sheathed Thrash. “Christ Church Horizon” plods forth at a menacing gait with fiery vitriol and the type of percussive Industrial crush that I relish. Undoubtedly, this turbulent track is a scathing indictment on the failings that tend to accompany organized religion like a rotting stench.

“They Lied”, a sample infused sonic palette cleanser of sorts leads into Chaos Doctrine’s bludgeoning cover of the legendary Slayer anthem “South Of Heaven” which brings this mammoth album to a close.

I applaud Chaos Doctrine to what amounts to a sonic journey of the most joyfully jarring proportions, a magnificent mishmash of metallic artistry that must be frequented and posthaste.

3 thoughts on “CHAOS DOCTRINE – ‘AND IN THE BEGINNING…THEY LIED’”