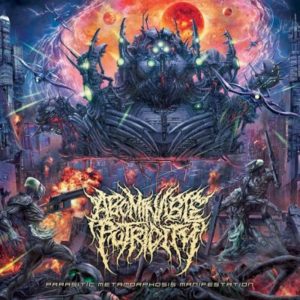 The much anticipated and highly awaited return of Russian Slam overlords Abominable Putridity is finally here in the form of the turbulent eight track monstosity that is ‘Parasitic Metamorphosis Manifestation’. Following on from the landmark Slam classic ‘The Anomalies Of Artificial Origin’ released in 2012, their latest slab of bludgeon keeps their legacy alive with twenty two minutes of sonic tumult, that, although fraught with many familiar Slam tropes, introduces a delectable plethora of stylistic variations into the mix that make for one helluva savage and scintillating ride.

Around the time “Supreme Void” was released last year, acting as a teaser to this album, misguided purists began to balk when it became known that this revamped version of Abominable Putridity featured the duo of the mighty Angel Ochoa on vocals and the multi-talented Alexander Kubiashvili handling all instrumental duties, a pairing down of their previous line up to say the least. I state with confidence that this release will satisfy even the most jaded Slam fanatic.

As has become custom these days, ‘Parasitic Metamorphosis Manifestation’ begins with an intro of sorts in the form of “Transcending Into Orbital Solitude” before heading into the slugfest that is “Supreme Void”. Its all here and in spades; a chunky spew of low slung chug, guttural vocals and battering ram rhythms that all us Brutal Slam fiends crave with such voracity. The thick production that houses the sonic onslaught causes every downstroke and double kick flurry to sparkle with robust heft and crushing clarity so that one may feel the visceral presence that music of this sort thrives upon.

I am utterly enthralled by the note bending prowess displayed on this album. The warped riffs on “Obscure Entity Of Darkness” and “Inorganic Infusion Protocol” cause me to blush like a schoolgirl with salmonella. Witness the Black Metal style riffs peppered throughout the latter half of “Paroxysm” and crack a wry grin of elation.

Slam, for all its brute force and bestiality, remains a stripped down form of Death Metal that I forever frequent when in need of something that does not demand to much of one emotionaly and mentally. Rather I ceaselessly return to this sub genre when escapism, elation and care free listening are of utmost import. With that in tow I cannot discount the superb musicianship that makes up ‘Parasitic Metamorphosis Manifestation’, a fine foray into unhinged ferocity and streamlined savagery that I have no doubt will be a favorite on many year end lists.