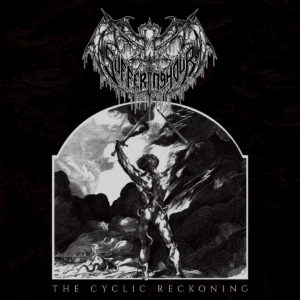 Prepare to be engulfed in a punishing, pitch black and pummeling sonic morass of utterly malevolent Blackened Death Metal that is raw, ravaging and atmospheric in equal measure. Welcome to the twisted and tumultuous world inhabited by Suffering Hour. On their fourth release and second full length, the monolithic, ‘The Cyclic Reckoning’, this Minnesota based sonic coven unleash wave upon wave of alternately woeful and wild Blackened Death Metal that is sheathed in melancholy and reverb drenched overlays.

Opening with the furious “Strongholds Of Awakening”, perhaps the most overtly aggressive track on the album, one is thrown head first into this particular bands patented blend of riff bending and labyrinthine chaos. If you’re expecting sparkle and polish look elsewhere for ‘The Cyclic Reckoning’ is housed in an earthy and gritty production that highlights the primal essence that runs like a thread through the five tracks that construct this album.

From the opening track onward things do become somewhat more melancholic in terms of riffs and atmosphere. I have no doubt that “Transcending Antecedent Visons” and “The Abrasive Black Dust Part 2” will leave the Black Metal contingent in a state of beatific bliss with their anthemic melodies and sense of inherent sadness.

There is a progressive edge which informs the proceedings on display as the flurries of guitar riffs and pummeling drumming swirl and convulse in a cesspool of rhythms, melodic layering and interesting effects that bring to mind Porcupine Tree as much as they do Arcturus.

“Obscuration” brings the corrosion back with a bludgeoning study in savagery that pulls no punches. Closing track, the gargantuan “The Foundations Of Servitude” is a sprawling display of devastating sonic artistry that is equal part dirge-meditaion and murderous onslaught.

Profound Lore delivers once again by offering us a release that is quality through and through. Imagine if you will classic Dissection combined with Sarcofago and perhaps early Autopsy and you will be close to the thrumming crush Suffering hour ply with such acumen. At times perhaps a tad to ponderous and melancholic for my taste “The Cyclic Reckoning” none the less kicks ass especially when firing on all cylinders. Check this stellar release out if expansive Blackened Death Metal is your fancy.