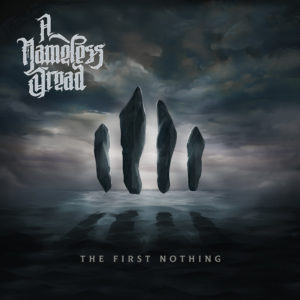 If anything can wake the dark, otherworldly behemoth Lord Cthulhu from his dreamless slumber in the catacombs of RL’YEH it is, undoubtedly, the heaving, frenetic and surging streamlined sonic savagery invoked by A NAMELESS DREAD.

Their debut album “The First Nothing” , be it either Metalcore, Deathcore or rather a corrosive, unique and crushing confluence of the aforementioned with a penchant for cosmic Horror , is a devastating whirlwind of sound where pummeling rhythms, warped riffs and gut wrenching vocals coalesce into what amounts to a blizzard of bludgeoning proportions. The single preceding this release and included on this album “Rot With Me” is emblematic of the slaughter to be found within its unhallowed depths.

The type of malevolent avalanche conjured forth by this fevered foursome would be right at home in the snow encrusted tale that is HP LOVECRAFT’S infamous “At The Mountains Of Madness”, the narrative that sent “The Cthulhu Mythos” and all the ghastly machinations thereof into motion.

Herein Damian Buys unleashes a frenzied maelstrom of tightly wound, deliciously blackened razor wire riffs that ride alongside the blistering drumming of Des Cooke and unearthly low end detonations of bassist Tim Botes while the vicious vocals of Rhett Freeman command the cacophony with the fathomless force of Dagon himself. In other words, it is utterly bestial.

Not all evidenced in this ferocious bands sonic arsenal is constructed upon face melting ferocity. As witnessed on the opening, clean and eerie chords of album opener “The Great Unclean”, peppered throughout the scorched earth smolder are moments of musical dexterity, seriously unnerving clean guitar interplay and dual layering.

Tracks such as “Enter Chaos”, “Bleached Bone” and “When God Blinks” are triumphant slabs of untethered tumult that flatten the feeble beneath their gargantuan and staggering gait. To conclude, “The Great Nothing” seethes with malevolence of the most unholy and diabolical nature. “Cthulhu Fhtagn” indeed.

2 thoughts on “A NAMELESS DREAD – “THE FIRST NOTHING””