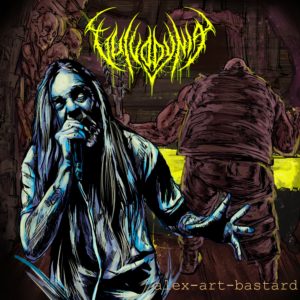 South African Slamming Deathcore heavyweights VULVODYNIA have laid siege to the international malaise of Slam and Deathcore with their patented blend of bludgeoning pummel. All and sundry are aware of these bestial brutes. In fact I think in some cities they have become a household name. If I remember correctly I think it was my geriatric, earl grey drinking neighbors that were pounding some VULVODYNIA from their speakers the other day which was strange for they generally knit sweaters and play croquet yet it is none the less emblematic of the dominance these dudes have attained over the earthly malaise.

With that being stated, whilst I salivate at the prospect of wrapping my fevered eardrums around the split between VULVODYNIA and legendary axe wielding maniacs ACRANIA in its entirety we have been blessed with their most recent track “THE DISCONNECT” from said split to sate our proverbial appetite for all things savage and destructive of light.

Well I for one am impressed by this slab of meaty malevolence. Replete with the churning, chunky rhythms, beefy guitars and the gargantuan heft we have come to expect by VULVODYNIA alongside an accompanying video which is suitably vitriolic “The Disconnect” is a devastating inferno of pig squeals, fretboard abuse and guttural vocals that will undoubtedly cause all whom harbor a penchant for music of this kind to rejoice.