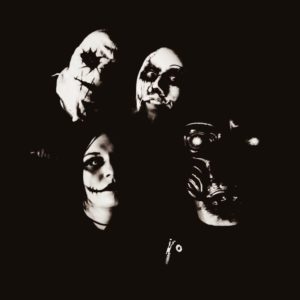 The debut EP by the elusively mysterious sonic entity known as CAPGRAS DELUSION titled “Never Saw It Coming” is the answer to your prayers if you fiend for music of the most emotive, catchy and dynamic kind.
Herein you will be treated to a duo of tracks that are both heartfelt and hellishly infectious in equal measure.

According to their bio which I suspect is also a mission statement of sorts, CAPGRAS DELUSION exist to heighten awareness surrounding mental disorders and in doing so paint a portrait of the human condition that is mired in both ugliness and beauty. Note, the aforementioned is merely yours truly paraphrasing to a certain degree. I applaud the efforts and acumen of all musicians involved in this collective, what they stand for and the execution of their craft.

The opening track “Never Saw It Coming” is an impassioned blast of emotive heft. Said track is built upon a bedrock of melodious rhythmic interplay where stellar instrumentation and alternately soaring and screaming vocals collide in a confluence of anthemic proportions. Every instrument is played with acumen and creates a cohesive sonic narrative replete with vocals that are impressive in both range and control. My immediate impression musically is a band that effectively straddles the divide between a sound that is equal parts Lacuna Coil, Korn, Asking Alexandria and perhaps Arch Enemy.

Peppered with sparkling leads and chunky, low stun riffs the aforementioned lead track and the following song “Ultraviolence” which is of a somewhat more melancholic and downtempo bent are propulsive bouts of angst and the reconcilliation thereof.

All in all I cannot fault music of such an impassioned nature and applaud this entity for their art. If perhaps there is one aspect that I feel needs to be addressed is the production. Although far from terrible, it is raw and loose,I sincerely feel that such a production does not do justice for music of this calibre. Whereas certain genres benefit from being housed in a production that is rough hewn and gritty I feel that a far more streamlined and robust sound would only enhance and augment what this fledgling sonic collective are going for!