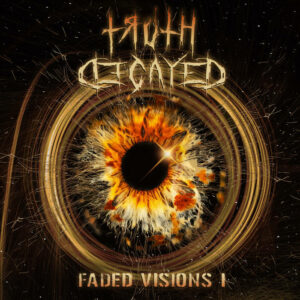 On their latest release ‘Fades Visions 1’ Durban based berserkers Truth Decayed unleash a exercise in classic, unbridled Thrash Metal that panders to no trends and is in no way unsullied by genre-hopping pretence.

Consisting of Ryno Theron on Guitar and Vocals, Warren Jones on Rhythm Guitar, Johan Maree on Bass and Vocals and Daniel Philogene on Drums, Truth Decayed are a quartet that have mastered the art of Thrash and know how to bring the Metal with aplomb.

Featuring five ferocious slabs of smouldering sonic warfare this punishing display of magnificent musicianship will inevitably leave all and sundry with a taste for turbulent Speed Metal oriented savagery sated with a smile pasted to their gleaming visage.

Beginning with the bludgeoning ‘Faded Visions’, a track that begins with fast paced ferocity and midway through introduces a beefy breakdown into its sonic narrative one has a very good idea as to what awaits one throughout the runtime of this searing collection of songs.

Track two ‘Absolute War’ brings to mind the instrumental prowess of Slayer as guitars chug in syncopated mid-tempo gallop atop a bed-rock of bass detonations and double kick devastation. There is also some seriously wicked dual guitar theatrics peppered throughout this track, one that is a damning statement on the corporate-war machine and the dire ramifications thereof.

‘The World I Know’ is a statement of loathing toward a world being torn apart by dishonesty and greed replete with some proggy instrumentation and a colourful palette of chugging riffs and pummelling rhythms.

Track four ‘PTSD’ is a bone cracking piece of corrosive Thrash filled with frenzied head-banging riffs and lyrics that seemingly portray a mind within the throes of malign insanity. The mid-tempo bluster that introduces itself halfway through the track is both sorrowful and poignant.

Closing track ‘The Witches Watch’ is a instrumental that is sheathed in swathes of melancholic, rousing guitar, rolling bass and skittering drum work, a fine send off for the propulsive songs that preceded it. This track shows the instrumental prowess of all involved in Truth Decayed and straddles the divide between Prog and Psychedelic Rock with aplomb.

Ryno is a soloist par excellence and his rapid-fire solos spatter each scorching song like shotgun shells on a battlefield whilst his pained howls, reminiscent of Human Furnace from Thrash-Metalcore titans Ringworm paint a portrait of corrupt governments, vile politics and war torn woe.

I highly suggest giving this a listen for the volcanic Thrash Metal Truth Decayed ply is done with the utmost integrity and unleashed with the utmost efficiency. Ferocious, fun and infectious in equal measure.