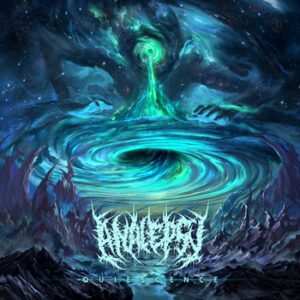 Perhaps one of my most anticipated releases of 2022, ‘Quiescence’ by Analepsy has surpassed my expectations. Ever since I heard ‘Atrocities From Beyond’ I was hooked on the punishing, celestial Slamming BDM these ferocious fellows ply, and this their sophomore album ramps up the technicality and musicianship tenfold.

Hailing from Portugal and featuring Marco Martins on Rhythm Guitar, Jao Jacinto on Bass, Calin Paraschiv on Vocals and lead Guitar and Leo Luyckx on Drums, this feral foursome specialize in Slamming BDM of the most streamlined and stellar kind.

Opening with the explosive “Locus Of Dawning” and offering up a further turbulent nine tracks of nullifying, skull rattling, technically astute Brutal Death Metal, ‘Quiescence’ is an album that hurtles forth with the frenzied gait of a comet set to crash into the Earths stratosphere.

Every one of the songs that make up this mammoth album are megalithic. Behold the searing solos that spatter “Impending Subversion”, the blast beat riddled bluster of “Elapsing Impermanence” which features Wilson Ng from the mighty Facelift Deformation and the bludgeoning breakdowns that litter the savage “Stretched And Devoured” featuring the vocals of the legendary Angel Ochoa and I challenge you not to crack a wry grin and bang your head in solidarity at the blistering theatrics that transpire.

I am a sucker for stuff such as this applaud Analepsy on bringing the fire on this furious album. Listen and Burn!