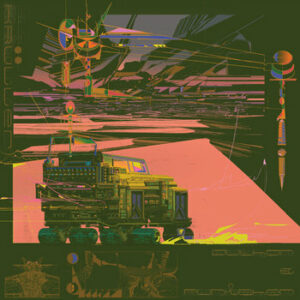 I have forever been fascinated by the one man sonic wrecking ball known as Author & Punisher. Tristan Shone is the multitalented creative force behind this simultaneously crushing, ethereal, violent and melancholic entity.

Shone creates post-apocalyptic swathes of sprawling Industrial Metal with a custom made setup that appears as if it came from a fever dream in which Ridley Scott’s Blade Runner and Shinya Tsukamoto’s Tetsuo: The Iron Man mated with malevolent intent. This visual is perhaps also an apt descriptor for the music that Shone conjures forth as well.

‘Kruller’ is album number three for Shone beneath the Author & Punisher alias and it is an all enveloping, expansive work of art that is blanketed in a myriad of luscious layers and warm textures. Far less ferocious and confrontational then his previous albums, ‘Kruller’ is rather content to wallow in a woeful morass of density and sorrowful splendour.

There is a palpable air of sadness that threads its way through this eight track behemoth, perhaps exemplified by the despair ridden swagger of opening track “Drone Carrying Dread”, the slithering soundscapes of “Centurion”, the aptly titled “Misery” and the absolutely gargantuan cover of Portishead’s “Glorybox”.

Herein Shone constructs an auricular canvas that is the sound of entropy, a crippled mechanical goliath stumbling forward whilst simultaneously falling apart, leaving pieces of fuming detritus in its wake.

The musicianship and artistry within this monolithic paean to melancholy is awe inspiring. Experiencing this album in its entirety is like being swallowed by a labyrinthine maw of fizzing circuitry, crackling reactors and ravaged cyborgs, melded together with mournful luminosity.

Undoubtedly harrowing, “Kruller’ is a transcendent experience that will provide all who deign to enter its majestic vortex of virulence with an embrace like no other.