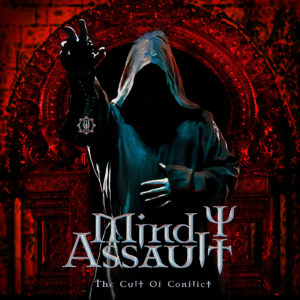 “Cult Of Conflict” by South African Melodic Death Metal titans Mind Assault is a pristine, propulsive and immaculately executed slab of Thrash infused Melodic Death Metal that is fraught with precision and stellar craftsmanship that cannot be ignored! This slab of smoldering sonic expression harkens back to the sounds purveyed by Gothenburg greats such as At The Gates, In Flames and Dark Tranquility yet with its own unique South African flare.

There is a sense of theater to music such as this as it is carried upon waves of epic orchestration and wrapped in symphonic layering that is fraught with grandiosity and pomp. For the most part I am quite particular about the type of orchestration I have a penchant for in Extreme Metal and at times can find it somewhat garish yet my passion for this type of nuanced and chest beating fare has certainly been ignited and set ablaze by the fantastic “Cult Of Conflict”. One just cannot deny that when music of this sort is performed and executed with such aplomb and aptitude, such as on this album, that it crackles with anthemic verve, infectious vigor and is utterly enthralling.

I found myself gloriously riding atop the glistening froth of the twelve ferocious and triumphant tracks on offer here. I am in awe of Mind Assault and their metallic artistry, of that there is no doubt. What a stellar piece of sonic artillery this band has crafted.

Featuring in their ranks, Jacque Fourie on vocals, he of the vitriolic vocal assault, Patrick Davidson on Rhythm Guitar, he of the tightly wound, razor sharp riffs, Ryan Eberlin on Lead Guitar (performed live by Stefan Steyn), he of the sparkling leads that lacerate and soothe in equal measure, Andries Smit on Drums and Orchestration, he of the atmospheric layering and devastating drum battery and Donovan Tose on Bass, he of the low end bludgeon, all musicians involved forge a cohesive sonic narrative that is frenzied, filled with emotive heft and a delight to listen to. The entire album bristles with professionalism and packs a punch of the most striking proportions.

Opening track “Descension” opens the proverbial floodgates with roaring vocals, blazing riffs and orchestral layering, a proverbial hoof to the head that gets the proceedings going in the most magnificent fashion.

Tracks like “Burn Down The Nation” and “True Force” are galloping pieces of powerful Metal that lay the fury on thick with their patented blend of dense riffing and devastating ferocity.
Peppered with killer leads and nuanced orchestral overlays that intertwine with the rhythmic battery on hand, “Prys die Vaderland”and the title track “Cult Of Conflict” are filled with a sense of heightened gravitas that certainly keeps things dynamic and delirious. One will also witness almost Power Metal like passages littered throughout this album as well.

This really is Metal of the highest caliber and if labels like Century Media, Nuclear Blast and Metal Blade are not knocking at the door of this stellar unit soon then there is certainly something wrong with the world for commercial appeal and stadium filling potential emanates from every note played on this album.