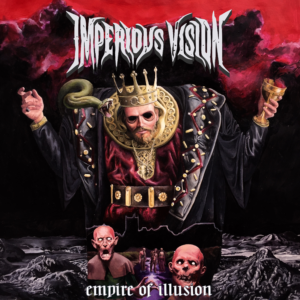 Durban based Berserkers Imperious Vision have, undoubtedly, unleashed one of the contenders for Death Metal album of the year in the form of the utterly majestic and simultaneously malevolent ‘Empire Of Illusion’. I am in disbelief that this is merely their debut for it is a devastating display of musicianship and maturity that is surely beyond their years as a fledgling collective; one that has existed since 2016. Herein you will be treated to a no holds barred onslaught that is both crushing and catchy in equal measure.

Folks when it comes to this slab of synapse shredding savagery I can only kneel at its monolithic altar of smoldering black fumes in awe.

Featuring Nick Hagan on vocals, the duo of Kai Stewart and Blake Merchant on Guitars alongside Brynn Huxtable on Drums, this four piece are responsible for releasing some of the most bludgeoning, vitriolic and yet streamlined Death Metal i have been fortunate enough to hear in a while.

From the menacing riffs and rhythmic heft of the opening “Intro” to the closing riffs of the title track “Empire Of Illusion”, this is an eight track study in sonic tumult that doesn’t pander to any trends and rather hinges upon a bedrock of glorious songcraft and massive rhythms that reign down like a landslide of lumbering boulders.

Again, the adherence to songcraft cannot be overstated and it is one of the many weapons in their impressive arsenal that set them apart from the glut of bands out there that ply their wares beneath the Death Metal banner. Songs like “Before The Dawn” and “Ignatius” are fraught with fearsome and atmospheric melodies that ride along a wave of double kick fury and scorching rhythmic dexterity. I may use two of the immaculately constructed pieces of pummeling vehemence that construct this corrosive album as examples but rest assured every track here is murderous. Borderline Homicidal! Speaking of Homicidal, I dare not forget to mention the vox of Nick Hagan which are roaring expulsions of torment and violence that paint a portrait of humanity at its most dismal and damned.

This is stellar Death Metal without pretense. The grandiose riffs plied by Blake Merchant and Kai Stewart are gargantuan and yet intricately nuanced. The solos that adorn the songs are tasteful, titular, triumphant and enthralling.

Imperious Vision has amalgamated their influences in such a way that they sound fresh, unique and vibrant. This is conjecture on my part yet imagine if you will, the majestic and anthemic grandiosity of Behemoth alongside Kataklysm, colliding with the savagery of Blood Red Throne, Krisiun and the technical acumen of Beneath The Massacre, in spirit anyway, you will be close to the framework of frenetic and fiery configurations the mighty Imperious Vision create. This is a barbaric work of dark wizardry that is fraught with precision.

To conclude, if you miss out on “Empire Of Illusion”you will do so at your own peril!