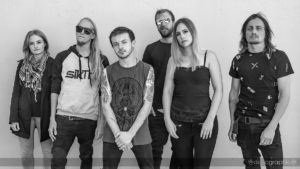 This ain’t no Broadway musical folks. This is Johannesburg based collective RIDDLEBREAK and this past Saturday they came to lay waste to eyes and ears across the land with a performance that showcased their propulsive blend of musical fury and instrumental prowess.

From the opening trident of “Launch Initiate”, “Something Sick” and “Rogue” we, the viewers, were treated to a devastating display of dramatic and emotive music of the most innovative and iridescent kind.

Whether it was the convoluted majesty of Ällegiant”, the chugging riffs and bludgeoning breakdowns of “Something Sick”or the smoldering, sustained notes and gargantuan grooves of “The Hog” RIDDLEBREAK performed each song with kinetic energy and impassioned vigor. Throughout the performance it was wholly evident that this sonic collective possess a fevered love for music.

RIDDLEBREAK are purveyors of dynamic and dramatic music which exists beyond the typical Metalcore template. The music they ply is idiosyncratic and pushes the envelope wherein the tapestry of textures and tones they invoke is explosive. Herein the crushing riffs and face melting guitar histrionics of guitarists Gareth Reed and Julian Vosloo alongside the low end detonations of bassist Roushan Van Niekerk are scorching. The lilting melodies of violinist Laura Atkinson are sublime. The blistering drum onslaught of Gordon Bosma is pummeling and the anguished vocals of frontman Jade Osner are heart wrenching. Each of the aforementioned elements merge into a mammoth form of expression that is certainly more then the sum of its parts.

To conclude, this evenings performance showcased a group of musicians with a unabashed adoration for their craft. Even through the glow of my PC screen the passion and emotion of all involved was palpable and amounted to a firey performance by a band to be reckoned with.

Many thanks to Sowaar Apparel, The Weekly Wire, Howler, Devographic Music Media, PR, Events & Artist Management and of course RIDDLEBREAK themselves for making this possible!