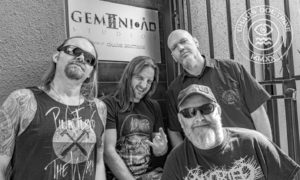 I have been salivating at the prospect of wrapping my ravaged eardrums around the newest track by Johannesburg based wrecking crew Chaos Doctrine for some time now!

Hot Damn! After having given it repeated listens I have emerged from its sulphur drenched sonic depths floored and in awe.

Featuring in their ranks members of legendary South African Metal covens such as Sacraphyx and Malachi, Chaos Doctrine are renowned for unleashing music of the most vitriolic nature whilst drawing upon the darker depths of the human condition in a harrowing fashion.

“Father Grigori” is a case in point. This feverish and furious track begins in a ominous, haunting manner where reverb drenched guitars, ambient textures and atmospheric layering insidiously converge. The initial magnetic undertone then gives way to a explosive frenzy of ferocity that is built upon a bedrock of blistering drumming, tightly wound thrash infused riffs and scathing vocals. Industrial overtones and pummeling instrumentation continue to collide alongside a guitar solo that would make Trey Azagthoth (Morbid Angel) blush. After said savagery “Father Grigori” then settles back into a malicious stupor; unleashing us from its searing stranglehold.

All in all an immaculate taster of an upcoming album that promises to be majestic especially if this track is anything to go by. Executed with precision and stellar instrumental prowess evoking notable bands such as Fear Factory, Slayer and The Amenta. I have no doubt that the sadistic and darkly fascinating Russian Monk upon which this track is based is dancing in the underworld with a gleeful smirk upon his rotting visage.