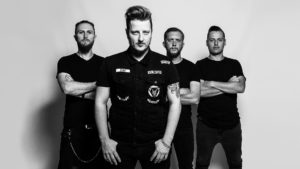 This past Saturday night the indomitable Black Bone Nation set the Urban Sessions stage ablaze with their patented blend of propulsive Hard Rock.

Fat, infectious riffs, sparkling solos, pounding drums and soaring vocals collided in a confluence of sonic bliss. The performance was one fraught with passion and unbridled energy.

Sheathed in flickering light, Black Bone Nation treated us, the viewers, to a robust collection of songs replete with catchy melodies and fist pumping rhythmic heft. Songs such as “Born To Rock”,”Live To Ride” and “Here I Am” were executed with aplomb, channelling the hedonistic flare of notable 1980’s Rock bands such as Motley Crue and Guns N’ Roses with more then a nod to classic Zeppelin and Blues Rock.

The sound was crystal clear and each instrument could be heard in its beauty which enhanced the entrancing music Black Bone Nation create. Visually I was impressed as the resolution was superb as the stream progressed smoothly and without a hitch. All in all a great show representative of a local band playing prime Rock!

Thank you to both Black Bone Nation and Urban Sessions for an experience that was fun and enthralling.