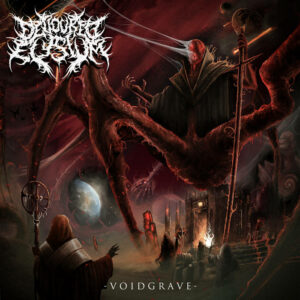 The latest album by Devoured Elysium is a twenty six minute exercise in turbulent, Slam infused Tech-Death that draws upon the megalithic musicianship of Decrepit Birth, Origin and Archspire as much as it does from the unbridled brutality of Katalepsy and Korpse.

Released by Gorehouse Productions, a label that have been bringing the fire as of late, as soon as I was alerted to the prospect of this album I had an inkling that it would completely annihilate!

The Slam elements are sparse on this their sophmore effort. Rather what this Turkish wrecking crew offer on ‘Void Grave’ is a frenzied platter of Tech-Death ferocity fraught with orchestral flourishes, arpeggio induced insanity and tautly wound passages of rhythmic dexterity.

With tumultuous displays of devastation such as “Green Screen Failure” and “Deus Ex Machina” know that the remaining explosive six tracks that make up this album will leave you reeling in the most delightful manner.