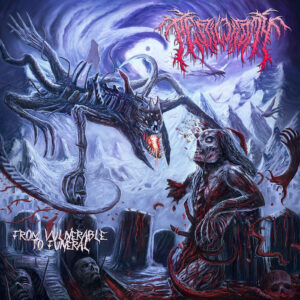 If you are a Slam aficionado then you have a very good idea as to what to expect when it comes to the punishing pummel Pestilectomy ply on their ferocious full length ‘From Vulnerable To Funeral’.

Released by the mighty RealityFade collective, a label devoted to their bands and fraught with a passion for the music they release, this thirty two minute display of chugging riffs, chunky breakdowns and gurgling vocals adheres to the Slam template in a rigid fashion, that although enjoyable can exist to the detriment of the album in a holistic sense; causing an overriding sense of the formulaic to take precedence over the proceedings which has the potential to leave one cold at times.

With the aforementioned in tow do know that I adore genre fare and Brutal Death Metal is one of my favorite Metal subgenres. In that sense I in no manner possess any ire toward any bands that are beholden to sonic tropes. In fact this is the very reason one tends to resonate with certain genres as opposed to others.

Tracks such as “Aspirated Human Marrow”, “Ministry Of Molested Necrophiles”, “Remnants Of Neurotraumatic Suffering”, and title track “From Vulnerable To Funeral” are prime examples of Pestilectomy at the height of their powers. These are tracks in which sledgehammer riffs, blistering double kick fury and guttural vox collide in the most crushing and effective fashion.

More often then not the bass drops and brutish bludgeon work their malevolent magic especially when blackened riffing is introduced into the sonic narrative. With that stated there are times in which the turbulence can be a tad trite.

In conclusion, with an immaculate production and streamlined songs ‘From Vulnerable To Funeral’ is definitely worth your time. I envision repeated listens ocurring on a regular basis. Now is the time! Go traverse Pestilectomy’s particular mire of deliciously grotesque grime.