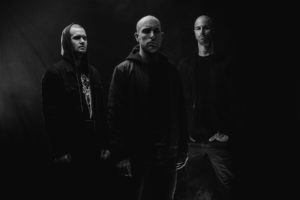 The most recent album by the indomitable, inimitable and sonically awe inspiring ULCERATE “Stare Into Death And Be Still” is a convulsive, corrosive, concussive and crushing slab of dark, dissonant and devastating Death Metal that is sheathed in atmospherics of the most ominous and melancholic kind.

This album is an otherworldly, transcendent and turbulent experience that is utterly enthralling. From the serpentine riffs and rhythms of opening track “The Lifeless Advance” one becomes aware that one is in for a savage, complex and scathing experience, the type that only Ulcerate can deliver.

Since their inception Ulcerate have been plying their unique brand of bludgeoning, angular Death Metal with unbridled ferocity and artistic flare; a unorthodox and complex auricular assault that occupies a similar pantheon to fellow contemporary collectives such as Dodecahedron, Deathspell Omega, Portal and Convulsing.

With five fevered slabs of sonic crush under their proverbial belts this, album number six, in my humble opinion is arguably their magnum opus in an already celebrated discography. A malevolent and magnificent work of woe and wizardry “Stare Into Death And Be Still” is one of the most ferociously iconoclastic albums I have had the honor of experiencing this year.

As evidenced in such tracks as the smoldering “Drawn Into The Next Void” and the vitriolic “Visceral Ends” this mighty slab of scintillating sonic heft will set your synapses ablaze in a confluence of punishing splendor. Drummer Jamie Saint Merat, Guitarist Michael Hoggard and Vocalist/Bassist Paul Kelland have unleashed a whirlwind of hellish proportions that demands to be experienced in its entirety. Courtesy of Ulcerate and Debemur Morti Productions you can stream this scorching eight song slice of heaven in its entirety. Enjoy the burn!