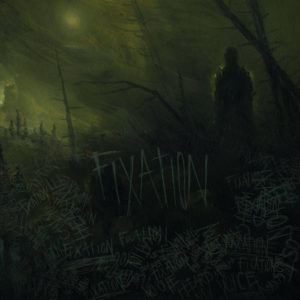 Get ready to be spirited away on a journey of searing proportions for the blackened, symphonic Metalcore scorch of one man sonic wrecking ball The Ember, The Ash is bleak, baleful, bludgeoning and uplifting in equal measure. ‘Fixation’ is this enigmatic individual’s debut album for Prosthetic Records.

Opening with “Strychnine” , a insidious, eerie slab of beefy, breakdown infused smolder, one that bristles with skittering beats and glitch oriented layering the proceedings begin in a most intriguing and propulsive fashion.

Title track “Fixation” brings on the blackened fury with a maelstrom of dark Metalcore and a malevolent Dark Funeral oriented riff that announces itself at the two minute mark. Dimmu Borgir meets Immoralist in the melancholic “Becoming The Eidolon”, a bludgeoning confluence of shimmering piano, tinkling keys, pained vocals, blast-beats and blistering guitars.

“The Colossal Void” is an epic piece of pummeling grandiosity that traverses a vast labyrinth of percussive heft and orchestrated pomp with aplomb. “Celestial Fracture (the tempest)” is an emotive, piano driven slice of bludgeon that is built upon a bedrock of atmospheric symphonic pummel and punishing riffs. “A Growing Emptiness” continues to portray that which has come before it with majesty in terms of aesthetic and style.

“Consciousness Torn From The Void” ends ‘Fixation’ on a somber note, seemingly paying homage to the Depressive Black Metal of Xasthur with its ghoulish textures and despair ridden density. Each song on ‘Fixation’ is immaculately constructed, each of which offers a cohesive narrative that snugly fits into the overarching ebb and flow of this vitriolic and evocative album.

Perhaps at times to lilting and delicate for my taste the musical maelstrom that The Ember, The Ash conjures forth is none the less frenetic and fevered enough to appeal to my sensibilities.

Lush layering, breakdowns, electronic overtones and rolling Black Metal converge with aplomb throughout the thirty seven minute runtime of ‘Fixation’ leaving no doubt in my mind as to why Prosthetic Records signed this maven of iconoclastic heft.