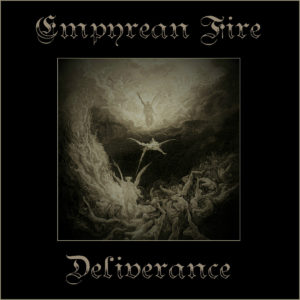 Admittedly symphonic Black Metal is not a sub genre I frequent often. I generally find its pomp and grandiosity somewhat difficult to stomach. Although I can wholly appreciate the acumen, effort and energy that goes into it and applaud all musicians which pursue their vision within these paradigms with such unmitigated passion it is far from a genre I have delved into deeply and is certainly not a speciality of mine.

With that being stated let me offer my subjective perspective on the album “Deliverance” by Empyrean Fire. The lofty concept notwithstanding, a intriguing reimagining on Milton’s “Paradise Lost”, herein you will be treated to a laudable if not somewhat tried and tested take on the Symphonic Black Metal formula. “Deliverance”, released late last year, is a seven track slab of sparkling, melancholic, emotive and triumphant Symphonic Black Metal replete with the orchestral flourishes, thorny thrash inflected riffs and battering rhythms that one has come to expect from bands that call this sonic hovel their home. Following a genre blueprint is not necessarily a bad thing and I for one have a plethora of chosen Metal sub genres that I frequent with unabashed abandon due to their adherence to the tropes of the genre in question. In the case of Empyrean Fire, this three piece adhere to the paradigms of their chosen genre and they do it with flare. That in and of itself is impressive.

Featuring Tricia Myers on vocals, who is also behind the concept of “Deliverance”, Jason Yorke handling vocals, Guitar, Bass & Programming and Brian Rush on vocals and Synths, Empyrean Fire are certainly a band to keep in your sphere of interest if the sounds plied by Carpathian Forest,Hecate Enthroned,Dimmu Borgir and Cradle Of Filth are your thing. There is no denying the anthemic nature of tracks like “The Coming Storm” and “The Siege” and even for one such as myself whom doesn’t frequent these realms said tracks are enthralling.

So in conclusion, from the perspective of a dude that finds this stuff a tad gherish and saccarine, I was none the less quite taken with what i heard. If you’re looking for your next favorite Symphonic Black Metal band look no further for Empyrean Fire will certainly sate your desire