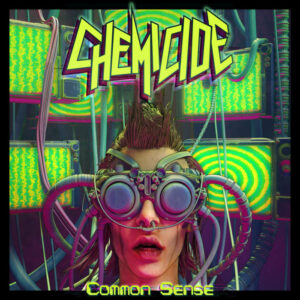 This thirty six minute exercise in vintage Thrash oriented vitriol harkens back to the violent metallic thunder plied by Nuclear Assault, Kreator, Sodom and Destruction as much as it shares traits with contemporary collectives such as Toxic Holocaust and Municipal Waste.

Opening track “Self Destruct” is a smouldering piece of throat ripping Thrash that is steeped in socio-political commentary, corrosive riffs, frenetic pacing and hysteria fuelled vocals. This track, one fraught with searing soloing and bludgeoning double kick action sets the precedent for an album that is built upon a bedrock of fierce Thrash Metal ferocity.

Tracks such as the savage “Lunar Entity” and the corrosive title track “Common Sense” bristle with righteous anger and surge forward with punishing heft and swagger.

“Barred Existence” is a bruising slab of bludgeoning Thrash that barrels forward at a somewhat more mid-tempo pace then the songs preceding it. The sparkling solo work that pepper the latter half of this track are utterly diabolical.

The production on this album is top notch giving the maelstrom of immaculately constructed Thrash Metal the type of clarity and presence that is so crucial for music of this sort.

Listen to the awesome bass and guitar interplay of “False Democracy” and be lacerated in the most blissful manner as you pump your fists skyward in triumph.

“Colour Blind” begins with a compact bout of melodious strumming that morphs into a mid-tempo chugger that will have you banging your head in glee.

“Strike As One” is scorching as is “Disposable” with its percussive hellfire and tightly wound breaks.

“Its An Action” brings the vein bursting ‘Common Sense’ to a close. A cover of the Poison Idea original, this crossover club to the head is a fitting end to an album that is a prime example of immaculately executed Thrash that will set fire to your synapses in the most scintillating manner. Get on it now!