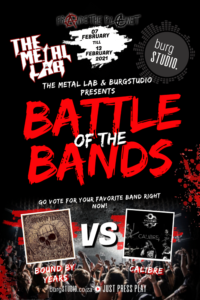 Welcome To Battle of the Bands!!

The winner gets EXCLUSIVE airplay and 15min Interview on BurgStudio with France the Planet during “Monday Night Metal Madness”.
Please do go over to Facebook and Instagram and like our pages to stay up to date with news from new, upcoming and unsigned bands from around the globe.

Please Choose your favourite track and vote on THE METAL LAB:

We Introduce you to Calibre Melodic Metalcore outfit Calibre first emerged in the Tehran Metal Scene in 2015 and sold out shows at big concert halls like Azadi Tower in their initial years. In 2019, signed a record deal with The Swedish record label Downfall Records to distribute their debut album The Storm Inside to record stores around the world. In 2020 The band started working on new material after going through a lineup change and in 2021 they released their brand-new single “…From the Abyss”.
The song tells the story of someone blaming themselves for losing the love of their life, being afraid to face themselves and the darkness they created around themselves and falling from that Abyss.

Our second band is
Bound By Years

All humble, enthusiastic, seasoned and passionate musicians with many years of recording and stage experience between them. Bound’s sound is mostly described as metalcore, somewhere between Lamb of God and Killswitch Engage with other influences such as Pantera, Parkway Drive and All That Remains.

The band has had the opportunity to be the opening acts for Soulfly, Light the Torch, Nile, Saliva, Hemlock, Motograter, Hed Pe, Allegaeon, Davey Suicide, Flaw, Rest Repose, Media Solution, Sons of Texas and the Veer Union.

Bound by Years has released three EPs to date, Bound By Years, Vitae and Into the Nature of Things and will be releasing their first full length album, What Fate May Bring, on December 12th, 2020. As the band shares their new sound locally and regionally, they continue producing music to enhance their catalog for upcoming performances.

Please check out the track Redemption Below.