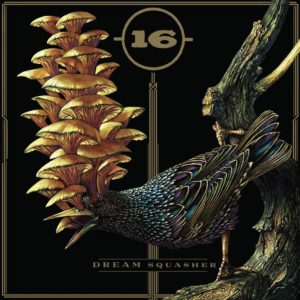 I have been enamored by the sumptuous, scintillating and scorching Sludge Metal that 16 ply for some time. With each subsequent album I hear by these barons of bludgeon I am further ensnared within their gargantuan grip.

Released last year, the monumental “Dreamsquasher” is an album that is equal parts mammoth heft and melodious smolder, one in which the two elements collide in a supernova of seriously galactic proportions.
Beginning with the vein bursting vitriol of the catchy and crushing “Candy In Spanish” the floodgates of ferocity are opened, whereupon one is treated to wave upon wave of music that is a confluence of woe, despair, festive nihilism and ferocious resolve. Both lyrics and instrumentation conspire to represent each of the aforementioned states with savage intent.

Consisting of ten turbulent tracks, that for the most part, stagger forward with a lobotomized stupor such as the trudging “Agora (Killed By A Mountain Lion)” and rarely faster flurries of fury as evidenced in the song “Ride The Waves”, “DREAMSQUASHER” is a devastating slab of Sludge Metal that is captivating in the most corrosive manner. “Sadlands” is emblematic of 16’s ability to meld melody and whoofer chomping rhythms, resulting in a track fraught with mournful vocals that is alternately uplifting and infectious, one that, in my humble opinion, is probably the most listener friendly song in their storied catalogue.

This is the type of music that makes one clench ones fists and grit ones teeth; primal and menacing sonic art that is weaponized with existential angst and anchored to a grid of gargantuan sonic power. If you havent had the pleasure of wrapping your ears around this ravishing and ravaging album do so now.