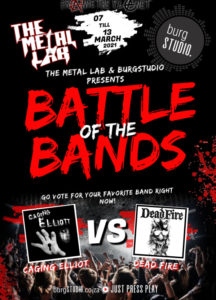 Welcome To Battle of the Bands.

The winner gets EXCLUSIVE airplay and 15min Interview on BurgStudio with France the Planet during “Monday Night Metal Madness”.
Please do go over to Facebook and Instagram and like our pages to stay up to date with news from new, upcoming and unsigned bands from around the globe.

Please Choose your favourite track below and vote on THE METAL LAB:

Our first band of the week is:

Booze rockers from North East Scotland. Drunk’n’roll with a stoner, grunge vibe.
Larger than life and twice as ugly. Signed to independent label Fat Hippy Record’s and Reaction Management.
They have toured Europe twice playing Holland, Germany, Poland,Czech Republic and up and down the UK umpteen times supporting the likes of Hawkwind, Sham 69, Phil Campbell and the Bastard Sons. They are a high energy live band that never fails to impress.

Please check out the track – My Mind Belongs To The Devil

Caging Elliott is a 5 piece Hard Rock/Alternative band.
The list of influences run the gamut from Skid Row to Pantera to Alice in Chains. Rusty Jackson has been singing whole life. He has been with the band for 2 years now but has been in bands since he was in high school. Joe Stephens has been playing bass since he was 13. Along the way he picked up a guitar as well. He played bass for the first year the switched to guitar. Mick Hollywood comes from a musical family and has been playing drums since he was young. David Boyanton is new to the band but not to music. He has been playing since he was 12 and has been in several projects. Last but not least is our bassist Justin Raymer. He is a veteran musician and the low end is where he rules supreme.Caging Elliott has had the honor to share the stage with many talented bands including Silent Ire, Saving Able, Bobaflex, Affliction of the Absent, Seeking Seven and 5 Stories.We have played venues in West Tennessee,Kentucky,Arkansas and have participated in several fundraisers including ones for the Dyersburg-Dyer County Humane Society and The Memphis Crisis Center.We took a few months off to regroup, write and record but with the release of Dont Tread On Me from upcoming album Under The Blackend Skies. We look forward to rocking the house down!

Please check out the track – Don’t Tread On Me