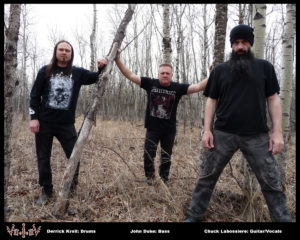 VOTOV are a force to be reckoned with and their beastly brand of bludgeoning and barbaric Thrash infused, odious OSDM will leave you salivating like a lovelorn ape. These Canadian filth mongers ply the type of OSDM that alongside similar acts like Fetid, Vastum, Witch Vomit and Pissgrave harkens back to a time where Death Metal was built upon a bedrock of primal rage that pandered to no trend or pretense.

“I.X.X.I” is their 2nd full length album and is a full frontal assault that has all the subtlety of a freight train colliding with a cement mixer! From the opening scorch of “Activating The Alteration” through to the barbaric staccato rhythmic romp that is “Heinous Lifeform” to the closing crush of “Regeneration” this album is a ferocious display of deadly OSDM that is fraught with ghastly,guttural vocals, gargantuan, groove infused riffs and blistering drumming that leaves a trail of mangled bodies in its wake.

Drenched in the mire of the masters of yore, such as but not limited to Venom, Celtic Frost, Autopsy, Dismember and Broken Hope with a focus on the tightly wound rhythms of seminal works by Six Feet Under and Malevolent Creation VOTOV bludgeon with unmitigated ferocity as they seemingly brandish their instruments like deadly weapons.

I am in love with the firey and ferocious Thrash infused OSDM these bruisers unleash; OSDM of the most bone shattering variety! If you have not given an ear to the monstrous and megalithic music VOTOV ply i suggest doing so with immediacy.