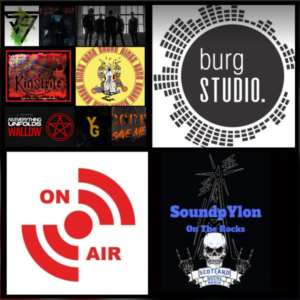 Come hang out with Carly and Nath from 10PM Central African Time, right after France The Planet‘s “Late Night Variety” show when they bring you an hour of some of the most rocking upcoming bands from around the globe!!!

It’s Sound Pylon‘s 1 year anniversary so they have a very VERY special show for you all! They have a catch up with Rob of Yesterday’s Gone and hear their brand new single, an amazing exclusive from Bone Broke Kings , plus awesome new music from CORE Seething Akira As Everything Unfolds and Smash Into Pieces.

The legend Bob Bones spins his 2020 band of the year Blame The Sacred AND of course, after the amazing response to the KinStrife give away, we have a quick chat with the lads and play a brand new and EXCLUSIVE track from the up coming KinStrife album, AND announce the competition winner!