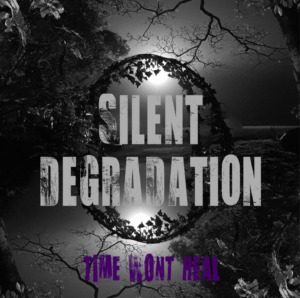 First off I must state that music of this calibre deserves to be housed in a far more robust, streamlined and sparkling production. With that being stated “Time Won’t Heal” by Silent Degradation is undoubtedly a superbly constructed and efficiently executed slab of sonic expression.

Herein one is treated to a turbulent exercise in metallic heft that, to my fevered ears, channels the pummeling Thrash orientated Metalcore of sonic covens such as God Forbid and Himsa as well as paying homage to the melodic Gottenberg Death Metal of At The Gates and their American counterparts Darkest Hour. Chugging riffs and propulsive rhythms abound replete with snazzy melodious overlays and howling vocals in an impassioned track that bristles with firey intent and vitriol.

Congratulations abound for what amounts to a display of stellar musicianship. “Time Wont Heal” is far from being fetid, in fact it is quite an explosive work of instrumental and vocal prowess. I humbly state that the muddy production detracts from the overall intensity of this track. Methinks that with a far more quality production in tow Silent Degradation have the potential to attain dominion in unfathomable ways. Check these guys out posthaste!