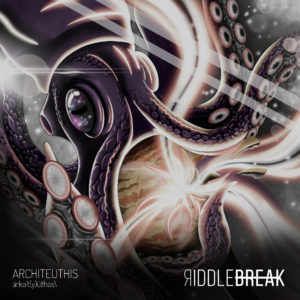 The latest EP courtesy of progressive Metalcore heavyweights RIDDLEBREAK is certainly a grandiose statement of artistic flare. With that being stated, although I find the music plied by this sextet to be sumptuous and savage in equal measure, I humbly think that the exquisite violin playing by Laura Atkinson could perhaps be incorporated into the bands sound in a far more holistic fashion for at times it merely comes across as window dressing as opposed to being an integral part of the bands sonic arsenal.

Opening track “Allegiant” is a propulsive call to arms where the impassioned vocals of Jade Osner, the blistering drumming of Gordon Bosma, the intertwining rhythms of rhythm guitarist Gareth Reed, lead guitarist Julian Vosloo and the low end detonations of bassist Roushan Van Niekerk collide in a frenzy of ferocity. From my subjective perspective though I found the violin playing of Laura sublime, it could have been infused into the tapestry of said track in a far more nuanced fashion as opposed to merely following the melodies of the guitars.

On the other hand “The Hog” is a fantastic example of all of the bands sonic artillery working in tandem to create a unique gem where, specifically past the four minute mark, the violin is integral to the crescendo that said track reaches, one of epic and heartbreaking proportions.

I am a fan of jarring time signatures and they are highly evident in these tracks in all their jagged glory. “A Momentary Brightness” is built on a bedrock of stuttering rhythms that are joyous and uplifting replete with lilting piano. When pummeling double kick action and the deep throated screams emitted by vocalist Jade ride alongside one another past the two minute mark I am in bliss.

Closing track “Eyes Of The World Ender” is a fitting slab of scorch to end an EP that represents a collective that have their eyes on the proverbial prize. Sometimes saccarine and melancholic at other times incensed, there is no denying that the music that this collective ply is fueled by passion and sincerity.

I guess when feeding my fix for sonic ferocity I find music of this nature, although immaculately performed, to be somewhat to pretty. I state this not in a denigrating fashion yet rather one that speaks of my taste.

In conclusion if you are looking for impassioned, epic, dynamic and heart wrenching music that has the potential to make you feel simultaneously melancholic, moved and impassioned then RIDDLEBREAK are right up your alley. I congratulate this sextet on an excellently produced and superbly performed EP.