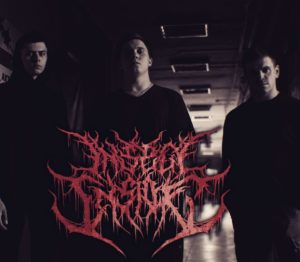 “From Russia With Love”?, I would rather state that from Russia with loathing would be far more apt concerning “The First Shining Of New Genus”, the debut album by Russian Slam crew Insect Inside.

Released courtesy of the mighty Gore House Productions stable, this bone shattering slab of smoldering Brutal Slamming Death Metal is the stuff of your most malevolent dreams and blissful nightmares.

Housed in a robust production, the pummeling rhythms and punishing riffs plied by Insect Inside are experienced in all their skull crushing glory. Sure, these guys may not be reinventing the wheel yet their take on Brutal Slam is superbly executed and fraught with savagery.

There is a sumptuous fluidity to the thirty three minute onslaught that is “The Shining Of A New Genus” that makes for a pleasing and cohesive listen. From the ominous “Intro” onward this is a darn delectable display of staggering, low slung riffs, chugging rhythmic spew and deliciously guttural vocals.

Tracks tend to, at times, collapse into one another yet this can indeed prove to be part of the pleasure when experiencing an album such as this in a holistic manner. With that being stated there is no denying that the thick riffs of “Sickening Ground” and the the thudding heft of “Revival Of Ungodly Deformity” both have their own unique presence, not to mention the nine other nullifying tracks that make up this album.

Expect a fun and stimulating listening experience replete with all the infectious tropes and traits that we have grown to love from the Brutal Slam genre. Russia is a breeding ground for music of this kind and Insect Inside are a welcome addition to this country’s legacy of lumbering Brutal Death Metal.