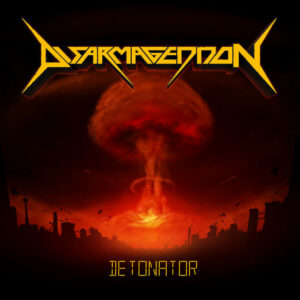 Hailing from Johannesburg , South Africa Disarmageddon specialize in the type of vintage, Thrash oriented smolder that will cause fans of classic Anthrax, Exodus, Kreator and Nuclear Assault to rejoice. Prepare for an exercize in neck snapping and bloodthirsty, headbanging bliss!

Opening with the vein-bursting bludgeon of “Homeland Insecurity”, a scathing slice of socio-political pummel, one is immediately introduced to the volcanic sonic vitriol that Disarmaggedon specialise in. The searing leads and barbed wire riffs on this tumultuous track collide with corrosive heft.
Track two “Warpath” continues the streamlined savagery evidenced on the opening track with an almost S.O.D oriented vibe peppering its Speed Metal malevolence. Jay Troskie’s soaring vocals ride atop each froth of blistering battery on offer, commanding each superbly constructed song with a range that emulates that of Joey Belladonna, King Diamond and Rob Halford. The disciplined and delectable drum battery of Desmond Cook lead each track forward with a festive pallete of double kick pummel as bassist Ashish Seetharam holds down the proverbial fort with sleek bottom end detonations while the dual guitar onslaught of Mathew Jordaan and Lance von Buddenbrock belt out belligerent riffs with merciless abandon. “Kamikaze” is a instrumental supernova in which dual guitar interplay and rhythmic dexterity piece together a cohesive sonic narrative that is an absolute pleasure to experience.

Track number five the vibrant and visceral “Detonator” ends things in a suitably scrumptious manner with an assortment of call and response vocals, vigorous rhythms and ferocious riffs.

‘Detonator’ by Disarmaggedon is a genuine, passion infused paen to Thrash Metal that is immaculately executed and glistens with incandescent splendor. I urge one and all to give this EP a listen posthaste.