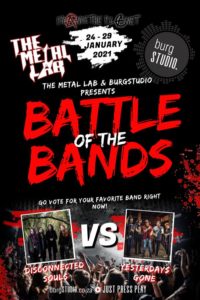 Welcome To Battle of the Bands in conjunction with The Metal Lab!! This event runs for 6 days.
The winner gets an interview and Exclusive airplay on Monday Night Metal Madness with France the Planet right here on BurgStudio!

Our first band on the bill is: Disconnected Souls

Disconnected Souls is a musical project born out of a desire to incorporate and blend the three great pillars of music, electronic, classical and metal. Hailing from Chester, UK, Disconnected Souls take their inspiration from numerous genres and combine thought provoking ideas to create something dramatic, atmospheric and unique. With each member bringing a diverse range of musical interests to the table, the resulting sound encompasses a wide variety of instrumental and vocal styles. Disconnect Souls experiment with notions of juxtaposing forces becoming entwined to create something fantastical. 2020 saw the release of their acclaimed debut EP, ‘Warring Elements’, and behind the scenes, work has already begun for their epic debut album.Please listen to their track Oathbreaker below:

The Second band on the bill is: Yesterday’s Gone

Forming in March 2019 the band has gone from strength to strength winning over crowds across the UK with a hard hitting raw blues rock sound and catching the attention of @Forgeamp, and a solid steel partnership was formed!! Although only forming in March 2019 don’t be fooled, Yesterdays Gone have a wealth of experience and between the 5 member of the band Rob Walker (Vocals), Josh Walker (Guitar), Danny Vernon (Guitar), George Sharpe (Bass), Stan Tomkinson (Drums), we have shared the stage with the likes of John “Rhino” Edwards from Status Quo and Rhino’s Revenge, Saxon (Official), The Dead Daisies, The Quire boys, Ryders Creed, These Wicked Rivers, The howling Tides, Dead Mans Whisky, Black Water Conspiracy, in our many previous incarnations, to name but a few! The band have gelled really well in the short time that we have been together and the music that is being produced takes influence from both Classic Rock, Blues, Metal, Stoner, and many other weird and wonderful influences, if you can imagine Zep had a love child with Clutch, Audioslave and White Snake you may be on the right track, Greed below