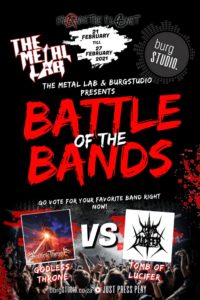 Welcome To !!Battle of the Bands!!

The winner gets EXCLUSIVE airplay and 15min Interview right here on our widely followed International Radio Station BurgStudio with France the Planet during “Monday Night Metal Madness”.
Please do go over and like the pages to stay up to date with news from new, upcoming and unsigned bands from around the globe.
Listen to the tracks below and cast your vote at the BOTTOM of the page.

Our first band for this week is:

In 2016, based in Las Vegas, Nevada, Jay (Vocals) and Tom (Guitars) formed Godless Throne with a vision of producing material with a blend of extreme metal elements.

A 3 song EP – titled Son Of Perdition was released in mid 2017. As the writing process continued, drilling in on a definitively unique sound, Godless Throne set out to record a full length album.Early 2020, saw the addition of Delorean Nero, also on guitars, and Serena Dalton on drums.

With the album complete and aggressively seeking major label distribution, the Pandemic struck and all plans were put on pause.The single Imperator 54AD was self released in late August and the music video premiered 1/1/21

The Full Length album Damnation Through Design is expected to be released mid 2021.

View their track “Imperator 54AD” below

Our second band for this week is:

The source of eternal numb which is the mother of the ultimate creation Lucifer the enlightened one, the bearer of light the source of living and non living the saint before many Brahmas.

The darkness which is eternal, the darkness it shall be. No matter how many times a galaxy is destroyed another instantly births on its bed It’s the Tomb of Lucifer.

As the dark lord is self created and omnipotent and omnipresent as it resides on every molecule of this super cluster so we can say Tomb of Lucifer as thy bed for thy slumber.

A milky way and galaxy are its dreams and awakening minds thoughts. The light bearer created the demi gods who took over different departments to circulate this universe and judge mortal and spirit realm. We all are its dreams.

View their track “SON OF BATHSHEBA” below.

Please Choose your favourite track and