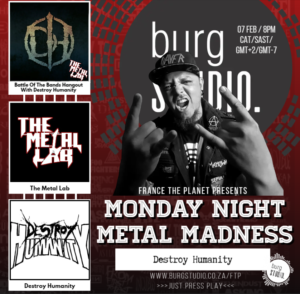 You better check out this “Monday Night Metal Madness” show, cause we brought back BurgStudio & The Metal Lab’s Battle of the Bands Winners hangout!!!

This week I had the pleasure of talking with Koen Vlerick, the vocalist and guitarist of this past week’s winning band, Belgian based “Destroy Humanity”. You will also get to hear a bunch of fantastic new metal from around the globe, including…