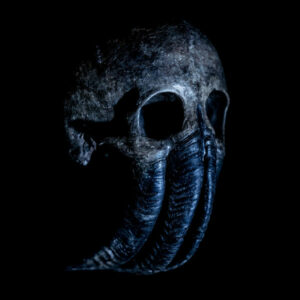 Featuring members of Sepultura, Neurosis and Amenra, Absent In Body create the type of Industrial Metal malevolence that simmers and seethes with menace and impending doom. ‘Plague God’ is the sound of the apocalypse unfolding in slow motion.

I absolutely adore the dense layering, glacial pacing and despair infused ferocity herein. Beginning with the brooding and melancholic piece of sonic architecture that is “Rise From Ruins”, ‘Plague God’ establishes its presence in an opening track that bristles with atmosphere, settling into a mid-tempo Industrial barn burner that bleeds anguish from its every sonic pore.

Track two “In Spirit in Spite” seethes with a sense of desolation and despondency that brings to mind a post-apocalyptic wasteland withering in the glow of a dying moon.

“Sarin” is a twisted labyrinth of barbed wire optics and film noir visuals that is vile in the most vehement and cinematic fashion. The churning froth of grisly guitar driven, slow burning hysteria that this track thrives upon is powerful to say the least.

The distorted, vocal onslaught alongside the woeful whispers and agonizing bellows that pepper each track are searing and increase the auricular damage one is prone to experiencing exponentially.

“The Acres/The Ache” is another slab of sorrowful smoulder that propels itself on the back of a bruising spine of tribal percussion and electro-scorched retina.

“The Half Rising Man” ends the proceedings in a fitting fashion as it blunders forward in a lobotomized, minor key fashion; fraught with an austere yet rich tapestry of tasteful, turmoil ridden angst. The throbbing synths and skeletal guitar layering make for quite an exercise in entropy as art.

Absent In Body are far more than the sum of their parts and exist as a holistic unit with a distinct artistic vision. “Plague God’ is absolutely awe inspiring stuff.